Its been a month and another successful Chopped dinner party has past.

This time the dinner took place at our loft in Pioneer Square  which we delayed our move by 1 week just to have the dinner party.

The theme for our dinner was French and while I expected someone to make crepes; no one did, we still had fondue too.  The dishes were all amazing even for some of the newbies who opted to make a salad with the ingredients. From oysters to sauteed beets on a baguette to souffle I would say our group is getting pretty sophisticated with the way of winning a chopped dinner party. 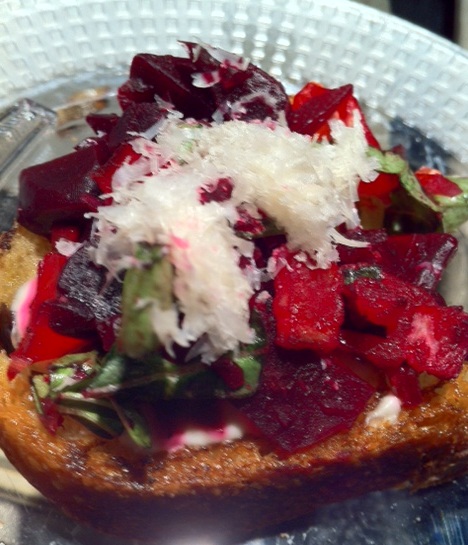 The challenge is not only using the ingredients but how to transport, heat or re-heat and plate your dishes on the night of the chopped challenge.

A take on Oyster Rockefeller

The night started with French 75 cocktails by Ashley at around 9:45pm a classic cocktail made from gin, champagne, lemon juice and a touch of sugar. Ash and I used to drink the hell out of these drinks on the balcony of the Flying Fish (when it was located on 1st and Bell during the summer time).

Appetizers rolled out at 10:00pm beginning with a Bacon and Cheese Wheat Flour Souffle. While this dish was tasty and placed in the top 5 it would have been better served for breakfast (that is a compliment:). Next a a slight take on Oysters rockefeller was served from the couple that won the first chopped dinner party and hosted the 2nd. The oysters while good, failed to impress as a few in attendance just do not like oysters (I personally liked it). We were then presented a three cheese pesto & bacon whole wheat rustic flat bread…also great. Ashley’s sister Maggie prepared a sauteed beet on a baguette (think bruschetta) but better (my personal favorite).  A newer couple to the Chopped dinner party series prepared a warm beet, bibb and bacon salad. Typically salads that do not transform the ingredients are frowned upon (aka they do not watch chopped); theirs was tasty. And finally we took our classic cauliflower and wild mushroom soup to a new level by adding bacon, creme freshe and star anise to already favorite of mine. 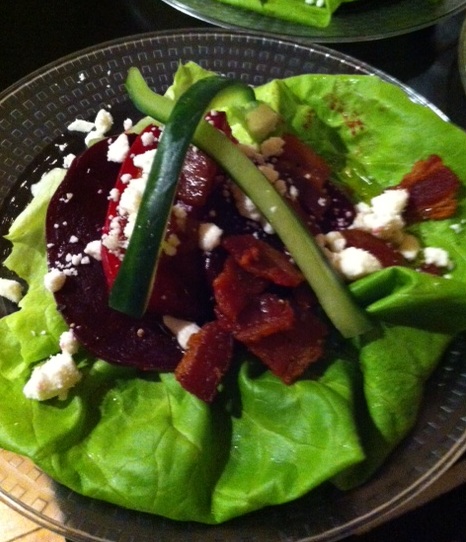 Rustic flat-bread followed by the beet baguette. But we got a HUGE nod and we are off the hook for hosting (hosting is harder than you think)..good luck dfog! 🙂

I do not know what they are doing in this pic

Here were the ingredients in case you forgot…

And here is how to throw a chopped dinner party.