Chopped dinner party…Its not a potluck! 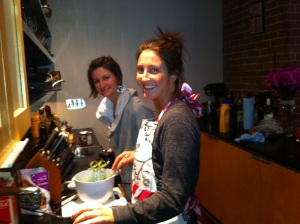 Prepping our apps (Ashley and her sister Maggie)

This weekend our friends Jake and Brie coordinated one of the funnest dinner parties we have been to in a long while…affectionately named: Chopped dinner party.

We are all fans of the show Chopped on Food Network and so they decided to throw a dinner party with Chopped in mind. While this was our first run I bet its still going to be hard to top the fun that was had. Here is how they did it…

First through Facebook’s invite/ group featured they invited about 10 people (4 couples and 2 singles). The invite went out on a Monday and the party was on Saturday. On Thursday night the host sent out 8 ingredients of which the contestants had to use 3 (ingredients) in either an appetizer, salad or dessert.

Here was the host’s invite..

As many of you may already know Chopped is a cooking competition that airs on the Food Network. The premise is that four chefs must use a basket of mystery ingredients to create a three course meal before time runs out. There are three rounds in the competition: appetizer, entrée, and dessert. At the start of each round the contestants are given a basket of varied, unusual, and sometimes seemingly incompatible items from which they are to compose a dish in a limited amount of time. They may supplement the mystery ingredients with any items in the pantry or refrigerator, but they must use all the mystery ingredients in some way.

We are taking an at home spin on this competition and would like to invite all of you to join us! The rules are as follows:
– Thursday everyone will be given a list of eight ingredients, of which they must incorporate three into one dish. Your dish can either be an appetizer, a side, a salad, or a dessert.
-With the list of ingredients will also be a general theme so that all the dishes come together and make for a delicious dinner.
-Jake and Brie will be responsible for the main course.
-Once you receive the ingredient list you can start brainstorming and come ready with your completed dish on Saturday.
-Some additional prep can be done at our place but try to keep this minimal.
-On Saturday everyone will be taking note on which dishes are their favorite and which are their least favorite.
-The person with the winning dish will receive a mystery prize of the host’s choice.
-The person with the loosing dish will be chopped from our friend group forever… Just kidding but you will have to a shot of the host’s choice and be showered in shame for the rest of the night.

I don’t think that any of us are professional chefs (no offense Mark) so this will just be fun to see what everyone makes, no pressure 🙂

And on Thursday here was the announcement of ingredients…

Hello and congratulations on your acceptance to my Chopped Dinner Party [;)]

So without further ado here’s what you’ve been waiting for… the ingredient list:

As a reminder you only have to choose 3 of these ingredients to use in your dish. Also if everyone wants to post if they’re making an appetizer, a salad, a side, or a dessert so we can all have an idea of what is needed that would be great!

SO…Ashley and her sister prepared two dishes 1) Avocado, apple, egg white lettuce wrap 2) avocado chocolate meringue. Even though both dishes were tasty…we did not even get a vote ;( My guess is our dishes were too complicated 😎

We started the party with shots and wine. Then the first dishes were the appetizers…ours and another couple(Justine and Ryan)…of which they prepared a awesome brucshetta (will try and get recipe and post later). From there we moved on to salad which a friend (Daniella) prepared (shrimp, arugula, truffle dressing salad also great). The hosts (Jake and Brie) prepared a veal dish with broccoli rabe again also bomb. Finally we  got to desserts both great.

Soon after we took another round of shots and the voting began. The voting was simple since no one wanted to hurt each others feelings…pick the winner. Justine and Ryan won with their brucshetta…and received a knife and an apron.

So now what happens is the winner, hosts the next Chopped dinner party (maybe we’ll invite our parents 😎