a meatloaf for Seattle

I am still waiting for Ash to send me her recipe…so I guess I will start with mine: Meatloaf Koobideh..FYI…this recipe would taste better BBQd over charcoal grill.

First off I used a Kitchen Aid mixer which Ash recommended against..probably more about cleaning it than winning our friendly competition 😎

For the ingredients I used:

Note!!! This step is the most important step when making this recipe so pay attention…

Peel and half the onion then put into a food processor. Blitz several times (its okay if the onions get mushy). Stack four good quality paper towel sheets and pour the onions onto the paper towels. Squeeze out all or as much of the juice of the onions as possible. Keep squeezing till the point you think the paper towels might give out…its okay. Set aside for a second while you prepare the butter

Cut the butter into three (1 tablespoon sections) does not need to be softened first.

Now for the easy part (you could do this by hand).. 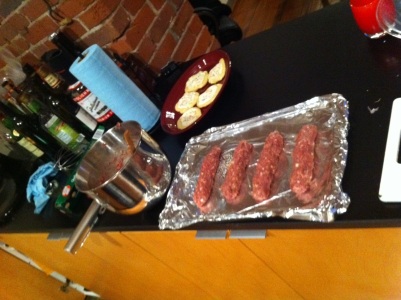 Put all the ingredients (including 1 egg (minus the shell))  into the bowl of the mixer and turn onto medium for 5 minutes.

On a cookie sheet layout 2 sheets of tin foil and spray with canola oil or pam.

Make four even sized 1.2 inch loafs (as seen in picture).

Pre-heat oven to 400 degrees and bake 10 minutes per side.

Quote/ gesture from Ash upon eating one of mine: smiling…”Wow! You nailed it!” Me: thanks…I think we both will win this competition 😎

***Jack was not involved in the cooking or tasting tonight…he had Fancy feast from Fred Meyer Ballard.