Just going to throw this out there —- Buttercream frosting is the best frosting in the entire world!  I will never default to making cream cheese frosting ever again.

Anyway, Maggie just started working night shift and needed to stay up past her normal bedtime hours to get ready for the next day at work SO we decided to make a 9pm trip to Whole Foods in SLU to make these delicious treats!  They definitely were flavorful (Mark claimed his lip was burning) but I thought they were just what they were supposed to be…. Spicy Chocolate Cupcakes! 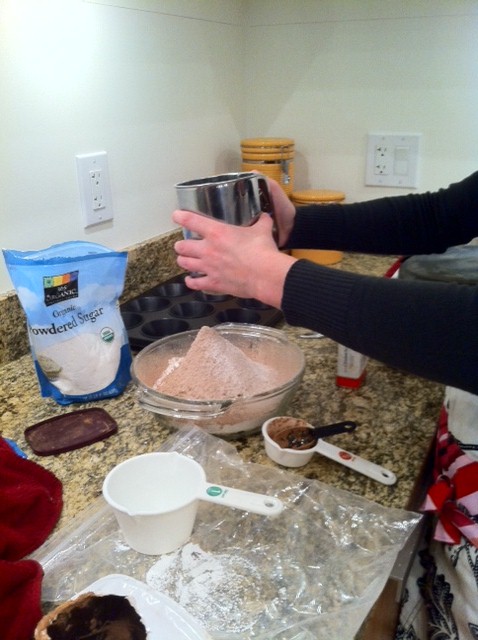 What you need for the Cupcakes:

What you need for the Buttercream Frosting:

Preheat your oven to 350 degrees and line your 12 cup muffin sheet with paper liners.

In a large mixing bowl, mix the butter and sugar until light and fluffy.

Slowly add the flour, cocoa powder, cinnamon and cayenne pepper.  This can be pretty messy…I draped a towel over the mixer and bowl so that I didn’t coat the countertops and floor with the dry ingredients.

Divide the batter evenly among the lined cups (I used a 1/3 cup to scoop the batter) and pop them in the oven for about 15 minutes.  Test with a toothpick prior to removing from the oven and then set the pan on a cooling rack to cool for about 10-15 min.

While the cupcakes are cooking, start the frosting!  This is the best part…

Beat the softened butter in a large mixing bowl until it is light and fluffy.

Sift the powdered sugar, cinnamon and cocoa powder in a mixing bowl and slowly add the mixture to the butter.  Again, kind of messy!

Mix on low until incorporated and then increase the speed while adding the milk to the desired consistency.

Place the frosting in a piping bag (I used a gallon ziplock and cut a very very small corner so that my frosting tip would stay put) and pop it in the fridge until the cupcakes have cooled completely.

Top each cupcake with the frosting (the more frosting, the better) and enjoy!